When we discovered that the SEA LIFE Aquarium in San Diego was adjacent to Legoland we took it as a sign that it was meant to be on our itinerary - and I am so glad we did. 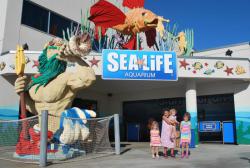 According to the website, the average SEA LIFE Aquarium experience is approximately one hour - and it opened one hour before Legoland Park.  We planned to visit the Aquarium first, then head next door to Legoland for the remainder of the day.  The time estimate was accurate for us, and it made the perfect introduction to our day.

The SEA LIFE Aquarium in San Diego is the only Aquarium with permanently integrated LEGO sculptures and exhibits. The kids enjoyed finding all the LEGO sculptures almost as much as the amazing and unique marine animals they observed. There were many different Lego-themed interactive displays, from bricks to build with to interactive displays and even an aquatic-themed Lego movie playing in their LEGO-themed theater. 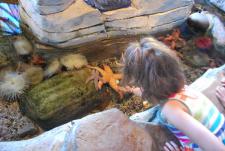 There are over 250 species at SEA LIFE Aquarium throughout the 2-story attraction.  The kids enjoyed learning about Jellyfish and comparing them to the display of plastic grocery bags suspended in the water - learning the importance of not littering because predators could mistake a bag for a jellyfish and ingest it.  We all enjoyed seeing sharks and seahorses and stingrays.  At one of the displays, a stingray was laying on top of a clear observation area, allowing the kids to get an up-close look at the ray's gills and mouth, which was a huge hit.  There were tunnels, allowing the aquatic creatures to swim above and alongside us, as well as a touch pool where the kids were able to gently touch a Sea Star and some other tame creatures.

An hour later, the kids had seen many new sea creatures and learned more than we'd expected at a vacation destination, and we were all excited to explore the neighboring LEGOLAND. Click here for my review of LEGOLAND California!

Meg Brunson, a mother of four, is Phoenix editor of KidsOutAndAbout.com.